Shepherd of the Year

Each year, MSBA recognizes an individual or couple for their distinguished work within the Maryland sheep industry; their unique contribution to the organization itself and their dedication to volunteerism.

2019 Shepherds of the Year: Marla and Andrew Keller

It is our great pleasure and honor to name Marla and Andrew Keller as our 2019 Shepherds of the Year. 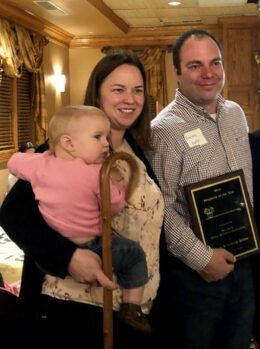 Both Marla and Andrew grew up on their family’s farms learning to properly care for sheep along with other assorted farm animals. They helped with daily chores around the farm, were active in 4-H, and showed their sheep at fairs. They were married in 2014 and soon after bought Vista View Farm, where they raise production Dorsets and Bluefaced Leicesters. They also have a thriving seasonal produce business and sell value added products from their flock, including blankets, socks, and yarn. In addition to all of their farming duties, they both have full time jobs off the farm.

The Keller’s main focus is on sustainable agriculture, and they raise their sheep on pasture that is supplemented with grain and hay that they produce. Their Dorset flock is mainly for the meat market, but they also provide 4-Hers with club lambs and sell breeding stock. The Bluefaced Leicester flock is primarily for the fiber market, and they produce both white and natural colored fleeces and sell breeding stock. Their combined flocks comprise 100 ewes, in addition to a few of rams of each breed.

To gain further knowledge about flock management and care, Andrew attended the Sheep Facilities Tour hosted by Pipestone. Also, the Kellers have applied for and received two Northeast Sustainable Agriculture Research and Education (SARE) grants. One grant was to study using rate-of-gain to determine the necessity of anthelmintic treatment for lambs, and the other was to evaluate the use of a drylot to improve the health of lambs that were not thriving on pasture. To assist in gathering data for these grants, they invested in a precision farming system that uses technology to collect the data (RFID tags, digital data recording, and automated weighing and calculation of gains or losses). They may be the first shepherds in Maryland to utilize precision farming technology.

Marla and Andrew believe in sharing their knowledge, and they have welcomed other shepherds to their farm to share their experiences on many occasions. They have held several open houses on shearing days at the farm, in addition to two precision farming workshops in conjunction with Susan Schoenian’s FAMACHA classes. Also, Andrew was a presenter at the 2017 MSBA Fall Seminar Day and Marla was a member of the producer panel at the 2019 Maryalnd Small Ruminant Pasture Grazing and Browsing Conference.

The Kellers enjoy sharing their knowledge and experiences with the younger generation, too, and their two young daughters are already quite familiar with most of the daily chores around the farm. In addition to their own daughters, Marla and Andrew help their nieces and nephews learn about sheep management and showing.

Andrew has been a board member of MSBA, and is currently serving as vice president. They are both always ready to assist family and friends in any way that they can. If their help is needed stacking hay in the loft, clearing snow from the lane, or assisting with a flock management chore, Andrew and Marla are always willing to lend a hand. The Kellers are truly an asset to their fellow shepherds and to the Maryland Sheep Breeders Association.

Past Shepherd of the Year Award Recipients